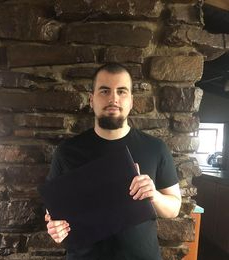 Iron sharpens iron, and in today’s post, I want to feature a family that took resourceful high school planning seriously, and just knocked it out of the park. He took his first CLEP exam at age 12 and has started his Master’s degree. His mom shares how they did it.

Joshua took his first CLEP test when he was 12 years old. After that first one, the summer before 8th grade, he continued with CLEP and DSST exams thru 9th grade accumulating 36 credits.

At that point, he started attending the local community college which offered a 60% tuition deduction for high school students. At the time, his major was engineering. In the middle of his senior year, with 90 credits towards a bachelor’s degree in engineering, Joshua felt called to change his major. His two passions were science and the Bible, and he wanted to study scientific apologetics. The problem was that transferring his mostly science and math credits into a biblical degree would result in him losing most of his college credits.

Joshua knew God doesn’t waste and so he kept searching programs until he found a Master’s of Divinity three year degree in scientific apologetics at Southern Evangelical Seminary. This was his degree, he knew it, but waiting to start until he finished a bachelor’s degree was not what he had really hoped to do. He sent multiple schools his transcripts with instructions that they figure out whatever degree he was closest to attaining at their institution. Excelsior College came back with a degree in Natural Sciences that only one of the classes on his transcript would not transfer into. But that was not the end of it. He then contacted both Excelsior and Southern Evangelical Seminary (SES).

He double dipped those master’s level courses, being able to apply them towards his bachelor’s degree and his master’s degree.

He now has an:

a bachelor’s degree in natural sciences

And yes, he is debt free, having received no scholarships or financial aid. His CLEP and DSST credits were significantly cheaper than regular college credit. The 60% tuition deduction reduced his community college bill substantially. But Excelsior was close to $1,500.00 a class. Given that the cheaper schools would have made him take a considerable number of additional credits, this was still our cheapest option. SES was just over $1,000.00 a class. As soon as Joshua knew these costs, he quit his job at an ice cream truck and became employed at Chipotle. Within months, he was able to start receiving tuition reimbursement. The $5,500 a year reimbursement removed a sizeable amount of that bill and the rest he paid for with his paychecks from that job.

Joshua’s sister is right behind him; 18 years old, a senior in college and also debt free. She too changed her major more than halfway through. The change in major can be expected given that they are choosing their majors at such a young age. It was truly mom’s biggest fear and now 2 of my 3 have done it and besides some stressful moments, it truly wasn’t all that my fears made it out to be. This can be done, and it can be done with changes in majors, a global pandemic, as well as a move across the country in the middle of it.

If you’d like to start your own Homeschooling for College Credit journey, you have our support! Start here

Every month for the past several years, we use the last day of the month to celebrate big and small wins- watch for tomorrow’s post for more inspiration and encouragement!