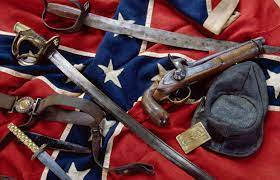 In this post, I’m going to feature the exam “The Civil War & Reconstruction” from DSST. With a passing score, this exam can yield 3 college credits.

EXAM INFORMATION
This exam was developed to enable schools to award credit to students for knowledge equivalent to that learned by students taking the course. This examination includes the causes of the Civil War, the political situations from 1861- 1865 and Reconstruction.

The exam contains 100 questions to be answered in 2 hours. Some of these are pretest questions that will not be scored.

Insider tip: students must get approximately 68% of the questions correct to pass this exam.

a. United States Society in the Mid-Nineteenth Century

b. Formation of Confederacy

b. War in the East

c. War in the West

b. Role of Women in the War

c. Black Americans and the War

b. War in the West

c. War in the East

b. Fall of Richmond

e. End of the Confederacy

f. Cost of the War

About these resources: The resources below represent a small selection of the possible resources you can choose from. DSST does not endorse any one curriculum as being a perfect match to their exam, so my advice is to layer tried and true resources with those that can help you build a solid homeschooling curriculum. In the curriculum layer, you probably won’t want to complete all the courses, but feel free to pick and choose based on how deeply you want to cover the subject. There are enough resources here to EASILY fill an entire school year / 1 high school credit course.