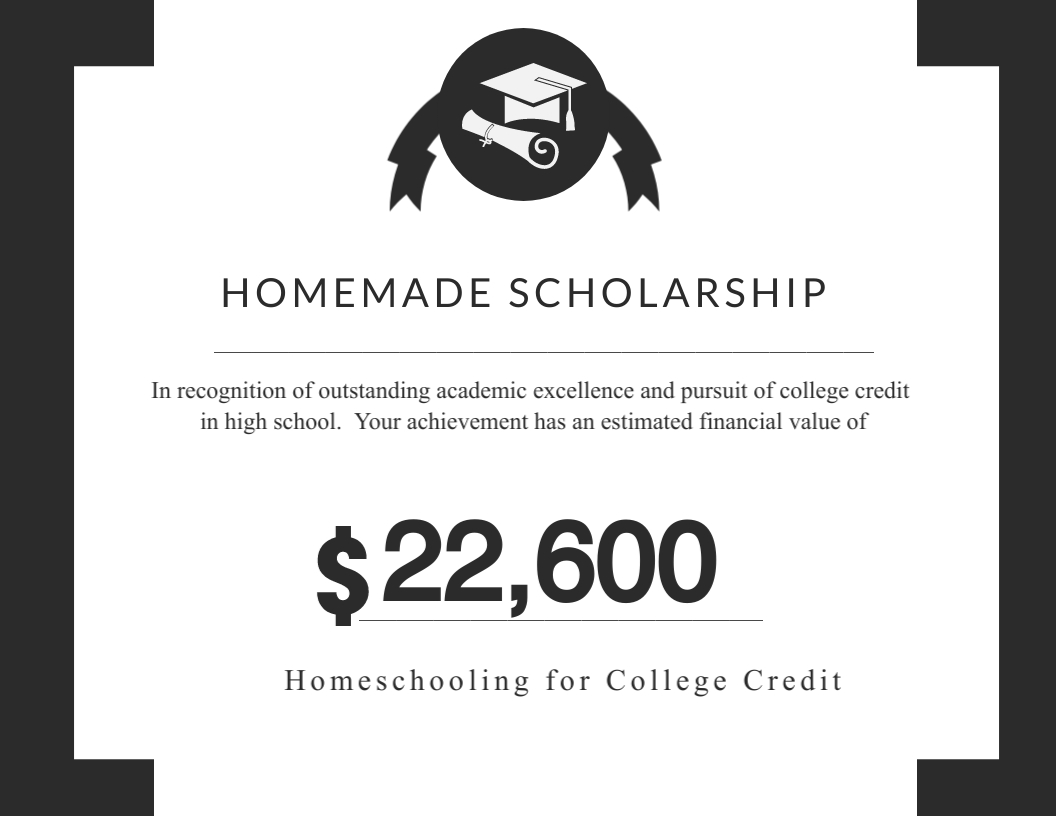 Genevieve, HS4CC parent from Illinois writes, “I’m happy to share my son’s story about Homeschooling. He’ll be graduating from high school this year with 30 college credits!”

“Our family is sincerely grateful to discover the huge opportunity that is Homeschooling for College Credit! He was accepted into his first choice college and will save thousands of dollars and almost an entire year of coursework, thanks to the guidance I received from your book and website.”

Emails like this are the highlight of my week, and I love asking probing questions about how credits are earned, what parents pay, and how students use those credits. In this story, you’ll hear from Genevieve, whose resourceful high school planning saved her family over $20,000. When I asked her if she’d allow me to share the details of her story here, she happily agreed! Here is her story.

Although we homeschooled my children when they were younger, they were all in public school when Illinois shut down during COVID and our local high didn’t return to in-person learning for an entire school year. Some of the courses he was offered by the school (online ceramics, online PE) didn’t lend themselves to my son’s future college goals, so we decided homeschooling was a better option.

He left public school in 2020 with 6 credits from taking 2 AP tests, but his school allowed him to register and take 2 more tests the following year which he studied for independently. We used Sonlight’s 300 level History and English Curriculum throughout the school year and the school added him to an AP classroom online so he could access study materials for the tests. The testing fee for each was $90. He passed these and this earned him another 6 potential credits. At the time, working with the school was the easiest option for us since we were new to homeschooling, but that was before we discovered the magic of Modern States + CLEP!

A lot of the material we covered in his History class was similar to the US History I & II CLEP, so he used the review modules at ModernStates.org to prepare for those tests.  He received a FREE voucher to test at our local test center — which is only 5 minutes away. He took and passed 2 CLEP tests (with free vouchers from Modern States) earning another 6 credits and it cost us nothing.

Finally, he enrolled in two online courses through Boyce College’s Dual Enrollment program https://boycecollege.com/academics/dual-enrollment/. They were Psychology and Public Speaking. Both of these are required freshman courses at the schools to which he applied. The cost was $99 per credit hour and each course was 3 credits (so $594 total). Although it was a bit pricier than the other options, I wanted him to have the experience of navigating online college classes before he’s in a new environment, and a side benefit was that it helped him learn how to register and pay for college courses as well as communicate with professors online. He passed both classes earning another 6 credits.

In addition to the personal growth and self-organization skills that he gained, being able to earn credits before college will save him time and money on his degree. At one of his target schools, the cost of 1 college credit last year was $420, and that doesn’t even include room & board and other on-campus costs that could also decrease if these credits shorten his time in school.

We are so happy and grateful to have found this community and all of your amazing resources. We plan to follow a similar path with my younger son also. For us, homeschooling for college credit is the answer. . .There’s no going back!

Genevieve has figured out the way to “guarantee” that her son receives the best possible price for his education. When you Homeschool for College Credit, you’re essentially outsourcing the credit that will ultimately be used for their degree. This outsourcing is smart because your teen is still living at home, you’re in full control of their curriculum and education, and the credit earned will come in at a fraction of the price that they’ll pay later when they graduate high school and pay full price!

Using Genevieve’s math of her son’s future target college, her son has accumulated 30 college credits for under $1,000 that would have otherwise cost him $420 each! When her investment is divided by 30 (the number of credits he earned) the math says she paid only $32 per credit for her son’s first year of college. That’s one amazing home made scholarship – and it’s already finished and waiting. Her son will apply as a freshman (because his credit was earned in high school, so he’s not a transfer student) and will still be eligible for all other institutional scholarships. Further, he saved 1 year of room and board ($10,000 national average per year) and will graduate one year ahead of his age-mates. This places him into his career and earning his salary 1 year earlier than planned.

One thought on “HS4CC Homemade Scholarship Story from IL”