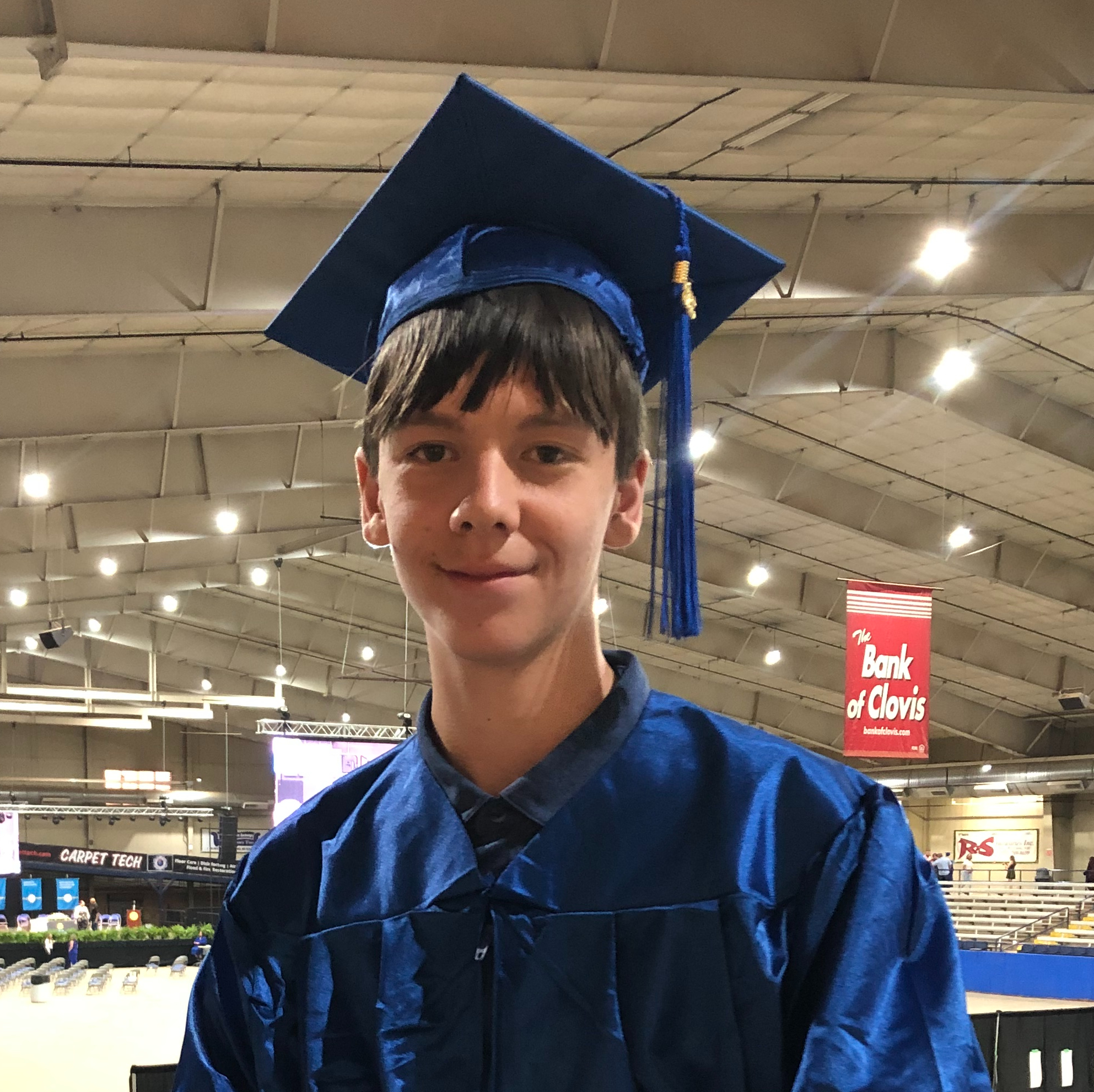 HS4CC dad Gordon F. gets honest about how his son earned college credits, what it cost, why they chose the college they did, and how their boy graduated with his associate degree this month!

Thank you Gordon for allowing me to ask you questions about your son’s degree and your willingness to share the details with the HS4CC community here!

When did your teen start earning college credit?

He took his first CLEP a few months before his 13th birthday. We followed your recommended format: we expanded on the subjects that we were already teaching, namely US History.

What started the process for you?

I read Homeschooling for College Credit, implemented a plan for his first CLEP, and it was successful. So was the 2nd, and then the third. We were ready to attempt an online class, and then ASU classes were going for $99, so we jumped in. After all of this, we knew that he was ready for traditional dual credit courses.

NOTE: he is referring to the Arizona State University Universal Learner Program. These classes are normally $25 to register and $400 to convert to college credit. Learn more.

What were some of your motivations for doing this?

Our state (NC) requires the student to either be a junior or to pass an approved list of tests to enroll in dual credit classes through the community colleges. Our son was still only 15 years old and hadn’t begun his freshman year in high school yet. When Jennifer Cook-DeRosa states that early successes with CLEPs and dual credit will be like “rocket fuel” later, it is so true. But we felt that we wanted to keep this positive momentum going, so finding a dual credit community college felt like the logical next step. Clovis Community College will allow your student to take classes at 15 years old, provided they are “college ready.” But they were willing to work with us on how to meet this standard. He could have taken an Accuplacer test, but they were willing to admit him with ASU credit and CLEP scores. What was most encouraging is they accepted him with unofficial transcripts from both, and this sped up the process (although we would later submit official transcripts so that his earned credit would transfer toward his degree).

What were some of the challenges your family faced along the way?

Being both out of state and homeschoolers, we were in the minority. Also, they recently started an early college high school program at Clovis, so each time we communicated with the college they assumed he was in this “in-person” program. We would often have to replay our entire story, but after that we would get great help and support.

What would you do differently if you were starting from scratch?

Not much to change. Things went well. We were well-informed parents before starting, so we knew what questions to ask. We had planned for him to take the minimum credits (15) at Clovis, but we altered course when we felt that he would greatly benefit from taking English Composition at the school since their instructors had been so helpful and supportive (he is dyslexic, so we had some apprehensions with ENG101 and how he’d do. He got an A!).

Was there anything you found especially helpful or encouraging to the process?

The staff at Clovis Community College (CCC) is amazing. They are exceptionally encouraging and motivated toward helping the students FINISH. The administrative staff was responsive and helpful. They were excellent listeners, because as homeschool families we are often “outside the box” clients. Instructors were positive, they posted several helpful reminders, and they would make frequent postings reminding students of the assignments due each week. They encouraged feedback, they had reliable ways of being contacted and they always responded in a timely manner. Whatever I write would be an understatement to just how supportive they were to all students regarding their success and completion of each class. Pam Cornelison was our contact person who helped us get started as an out of state student. As a homeschooling parent, I worked with her including sharing our concerns. She was helpful, committed to our concerns, and a class act person.

Have your other children earned college credits?

His younger sister hasn’t reached credit-ready age yet, but we will definitely pursue such options when the time comes. Although all children are different, our efforts with him have given us a valuable blueprint for how we will approach her time.

What about other college credits?

(NOTE: in state tuition for New Mexico residents is between $48-$59 per credit!)

Any strategies or tips for Clovis?

Clovis accepts a maximum of 32 CLEP/DSST credits. 15 credits must be completed at CCC. Aurek he got an Associates in General Studies because it only required ENG101, ENG102, a communication course, and a lower level math. It also required an online health class (worth 2 credits) that was very well-constructed. All other credits (total of 60) were up to the student to choose.

We felt that most of the credits he could fill with his CLEP scores. In particular College Mathematics CLEP was worth 7 credits, and they accepted DSST Technical Writing to substitute for ENG102. We felt that the degree would “crystallize” many of his CLEP credits. After all, even though CLEP credits are good for 20 years, they only become forever once they become part of a degree.

Many people will probably wonder why we payed for out of state dual enrollment when we could have waited a few years and gotten in state tuition for free. For us, it was a matter of time and opportunity. Finishing many of his credits now will open the door for us to do many things we WANT to do later. Grandiose ideas of what we wanted to do with our homeschool time now seem very possible thanks to what he has completed so far. In addition, when we consider the cost we really only count the tuition total since all of the other costs will be similar to our in state obligations. From our perspective, an Associates degree is well worth the confidence and time saved that it provides.

We also pursued these classes at Clovis with an assumption: that our son doesn’t truly know what he wants to do in college or after. Most of the classes in an associates degree are general education courses, and these can be helpful to give him a greater understanding of what different subjects and career fields may entail. He can take courses without the finality of choosing his path at so young an age.

I see him as less of an overachiever and more of an opportunist.

If any of these themes seem relevant to your child’s journey, and they are not yet eligible for in state dual enrollment, then I would recommend considering Clovis Community College as a possibility.