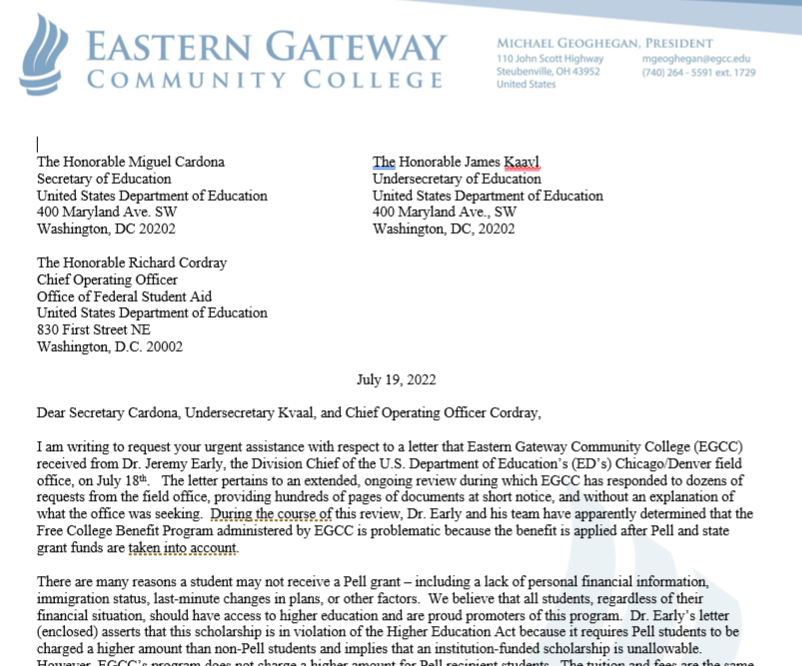 Many of you have sons or daughters who have taken advantage of the free associate degree available through Eastern Gateway (Ohio). This degree was for anyone who had a family member in the union, and it was hugely popular. They awarded 47,000 degrees in the few years it was open, and I’ve not only posted about it, but shared the success story of their graduates who came from the Homeschooling for College Credit community. It was just shut down.

Despite there being 25,000 students ready to start classes in the fall, the free program is done. (Eastern Gateway is otherwise operating normally)

Last November they were placed on accreditation probation. They were growing too big and too fast and not hiring enough teachers. I didn’t write about that because that kind of thing happens all the time and usually the college just complies. But, in January I wrote a post about Eastern Gateway’s program was being under investigation for a different reason- financial aid practices. The rules that govern an institution’s participation in financial aid are obviously strict and clear. The U.S. Department of Education has concluded that Eastern Gateway did violate financial aid rules (specifically those regarding Pell Grants) and is requiring them to stop the program.

They were given instructions for turning this around, let’s see if they do.

P.S. What I find the most interesting about this entire program, is that I always thought it was being funded by the unions in the United States. As it turns out, you only have to be associated (loosely) with a union, and that the tuition is being covered 100% by Pell Grants. What I find unethical is that the students who already qualify for a Pell Grant are not being told that they could use those grants anywhere- and that being associated with a union doesn’t really matter. The students who really “got something for nothing” are the ones who were financially stable enough NOT to qualify for Pell, and had their tuition waived.